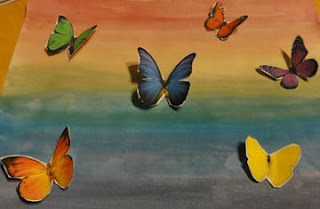 I am hoping that you all are having a beautiful Earth Day.  It’s quite special to me as I’ve always felt a sincere closeness to nature and to the Earth, herself.  I’ve always treasured and adored our planet, but I think it was in my Ecology class in college when I learned about the Earth and the inherent intelligence and wisdom she holds.  It was in a discussion about the GAIA hypothesis by James Lovelock when I learned about the theory that suggests the Earth is a complex, self-regulating organism – just as we are.  She is a sentient being who is living just like you and me.

She’s been through a lot during her entire existence as she has grown and learned with us all, but I hear that there is nothing but amazement on the horizon as we approach exciting times – some of which have never before been seen in the entire history of the universe.  Apparently, it’s a pretty big deal, and the planet is being watched, loved, and observed by our families throughout the universe, omniverse, etc. like never before.

I just want to offer some additional insight into the sheer brilliance of this beautiful, diverse planet.  In light of Earth Day 2012, I am excited to share some information to intrigue you and hopefully lead you to respect her even more and understand the importance of sharing love and compassion with her.

For starters, I think it’s interesting to review how, when, and why Earth Day was actually begun in 1970.  It was the perfect time and environment in which to lead a revolution for the awareness of the Earth.

Once we understand that, let’s look at the history behind Mother Earth/ Divine Mother/Mother Nature/GAIA the Earth Goddess.  Some interesting topics arise when considering the connection of “the Mother” to the planet Earth….and check this out if you want to learn more.

So - what would the planet say if she could talk?  Check out Pepper Lewis, who has a deep connection to our beautiful planet.  Here are some interesting interviews (Part 1, Part 2, and Part 3) conducted from the perspective of the youth of the world and the impact they can have on the health of the planet and the environment in which we live.

On a final note, I have always been intrigued by the sheer structure of the building blocks of Creation and the universe.  It is largely influenced by tones, harmonics, structure, etc.  I welcome you to listen to the music of the Universe – created by assigning musical notes to patterns, algorithms, and mathematics of the universe.

Thank you for reading this passage, and I hope it has helped to intrigue you and to increase your interest in your beautiful planet.

GAIA – I love and thank you!

Posted by Let Earth Rise at 8:43 PM No comments: